Board Supports Veterans Stand Down

The Placer County Board of Supervisors endorsed the 2014 Gold Country Veterans Stand Down Tuesday while thanking veterans for their service and sacrifices on behalf of the United States.

The Stand Down will be held September 16-18 at the Placer County Fairgrounds in Roseville. The event is designed to provide a one-stop location for veterans to get the resources, materials and contacts they need.

“I’m very proud to be a part of this,” said board Chairman Jack Duran after reading a resolution expressing the board’s support for the Stand Down and thanking veterans for their service.

In a report to his board colleagues, Chairman Duran noted that the Gold Country Stand Down will be open to veterans from Placer County and neighboring counties. It is sponsored by the Gold Country Chaplaincy.

President William Hart of Gold Country Stand Down addressed the board, noting that dozens of organizations and many volunteers help put on the event.

He said this year’s Stand Down will primarily focus on homeless and at-risk veterans, but emphasized that all veterans and their families are invited to attend for access to any services they need.

In his memo, Chairman Duran noted that the term “stand down” originated with the military, describing efforts to give battle-weary soldiers opportunities to gather in relatively safe and secure environments while they rest, recover and take care of other essential needs. 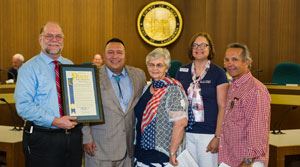 At the far left, President William Hart of Gold Country Stand Down displays a resolution approved by the Board of Supervisors Tuesday endorsing the 2014 Gold Country Veterans Stand Down to be held September 16-18 at the Placer County Fairgrounds in Roseville. The resolution also thanks veterans for their service and sacrifices on behalf of the United States. With Hart, from left to right, are Board Chairman Jack Duran, Patricia Everett of the Lincoln Kiwanis Club, President Loraine Browning of Sacramento Blue Star Moms and Ted Widing of the Lincoln Kiwanis Club.