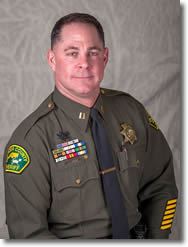 The Placer County Board of Supervisors honored retiring Placer County Sheriff’s Captain Jeff Ausnow for 27 years of service to the County and the community. Captain Ausnow began his career with Placer County in 1987 as a deputy sheriff in the North Lake Tahoe Substation and since that time has worked his way up through the ranks, serving in nearly every area of the Sheriff’s Office and holding a number of positions.

“Jeff has performed with unfailing professionalism and conscientious attention to duty throughout his career,” said Placer County Sheriff Ed Bonner. “He is an effective leader and skilled communicator who led with understanding and compassion accompanied by large doses of humor.”

Prior to joining the Placer County Sheriff’s Office Jeff Ausnow, who was raised in Placer County and graduated from Colfax High School in 1981, served in the United States Army as a military police officer, as an officer with the State Department, and as a deputy sheriff for Modoc County. Although working for his hometown sheriff’s office was his first choice, a hiring freeze in Placer County forced him to go elsewhere for work.

“Once they lifted the hiring freeze in Placer I came right back,” he said. “I have wanted to be a policeman since I was in Kindergarten and the chance to do that in my own community has been incredible.”

In addition to serving as Public Information Officer, Jeff Ausnow was on the SWAT team for 21 years and served as an instructor for defensive tactics, impact weapons, and physical skills. He also held patrol positions in both Auburn and Tahoe, as well as working in investigation and in the jail. Since 2010 he has served as commander of the North Lake Tahoe Substation.

As a retiree Jeff plans to run his business, Auburn-based Advanced Performance Coating. After spending 33 years wearing uniform and a gun he said his retirement is bittersweet, noting that his fellow Placer County employees and the community have become like family.

“I wouldn’t trade my experience working with the Sheriff’s Office in my community for the world,” Ausnow said. “I’ve been so fortunate to really become part of what makes Placer County great.”