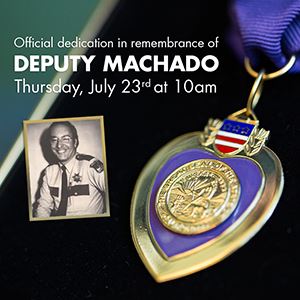 In 2008 Deputy Machado was posthumously awarded the Placer County Sheriff’s Purple Heart. James had served the Sheriff’s Office for four years. He was survived by his wife, Nancy, and three young children; Jim, 7; Joy, 3; and Jeanne, 1.

Deputy Machado’s family will be flying in from numerous states, along with his son who serves in the military. The adjacent business is going to clear space and make room for the unveiling. After the dedication ceremony, family, friends and former co-workers are invited to the Auburn Justice Center to visit and have refreshments. The project was paid for by the Placer County Deputy Sheriffs’ Association, the Placer County Sheriff’s Council and the Placer 10-35 Foundation.