Does the idea of speaking publicly give you butterflies? If so, you’re not alone. One expert says that the average person ranks the fear of public speaking higher than the fear of death! But it doesn’t have to be that way. It certainly isn’t for Veena Vijayaraj-Kadidal, an IT Analyst in Administrative Services. Veena was terrified of speaking publicly, but Toastmasters changed all of that. Read why, and how conquering her fear led to her receiving Toastmasters’ prestigious Distinguished Toastmasters Award, a county first.

1. Why did you join Toastmasters?

There was a countywide email broadcast to all employees about an open house for Toastmasters 13 years ago. I visited the open house out of curiosity. As I watched Kimber Goodman, a Placer County retiree, give her speech at that open house, I remember thinking to myself, “I want to be her.”

The main reason that speech by Kimber spoke volumes to me was because of something that happened to me about 25 years ago. I had to give a speech in college. I prepared really well and knew my subject. However, I went up on stage and just started giggling for the whole allotted seven minutes because of nervousness. I finally got the nerve to finish my speech because I focused on the friendly faces of my professor and friends who encouraged me with their head-nods that I could do it.

When I first visited Toastmasters as a guest, I gave what is called a ‘table topics’ speech, which is extemporaneous speaking. You speak for a minute to two minutes on a topic they pick. When I didn’t die that day 13 years ago speaking to a group of strangers in the audience, I immediately signed up. I found that they were going to help me become more confident with speaking in public and we have become really good friends. I found my voice by feeling comfortable speaking up at meetings. 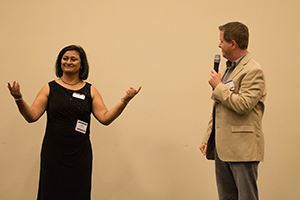 2. Has Toastmasters helped you build skills in communication and leadership?

Toastmasters has been the best thing for me since sliced bread. Even though it has nothing to do with toast.

When I was the project manager for a countywide information technology project, I was able to present to a diverse audience of employees and even to the public. Being able to communicate in a way that was simple and in familiar words was something that I learned at Toastmasters. Rather than making the presentations overly technical, understanding my audience has helped me be a better communicator. Now I am ready to sign up with the communications team to be a speaker on behalf of the county.

I have been honing my leadership potential for the past 13 years. I have been a club officer almost every year the past 12 years and went on to lead the area with four clubs and 28 officers reporting to me. This year, I took on something a lot more challenging – I ran for elections. I had to run a campaign and learn the rules. I became the division director at Toastmasters District 39. I now lead 19 clubs with 133 officers. I also have seven direct reports. It is like ‘leadership boot camp’ every day. The best thing that I have received from it has been the networking and free mentorship I get from members who are anywhere from Tony Robbins coaches to John Maxwell coaches, CEOs of companies, and management at many state departments.

I have also participated in speech and evaluation contests and won awards in the area and division level.

3. You are the first Placer County employee to receive the Distinguished Toastmasters Award. What is required to receive this award?

The Distinguished Toastmaster award is the highest our organization bestows. It recognizes a superior level of achievement in both communication and leadership.

To earn the award, you must complete a series of milestones in the areas of communication and leadership. For the communications track, I had to give over 40 prepared speeches, presentations, coach new members on giving three speeches and more. The leadership track involves chairing events, being a club and district leader, help a struggling club grow and reach distinguished status by becoming a club coach, and much more.

4. How do you think this award will impact your work at Placer?

I have learned a lot about communication, leadership, mentoring, coaching, teamwork and more. With my education and experience as a medical doctor, experience in information technology and my communication and leadership skills from Toastmasters, I am able to communicate well with not only my colleagues but audiences of every background.

I would love to be able to speak to the public on behalf of Placer County and educate them on health, technology, leadership, communication and more. If I get that opportunity, it would be the perfect fit by bringing back my education and background full circle.

The sky is the limit on what is possible with this award. I am always ready to offer my skills and passion to help Placer County grow as an organization.

5. Now that you have this distinguished award, what’s next? 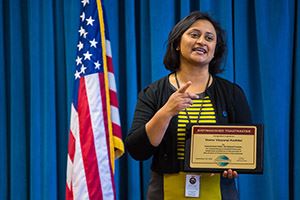 This is only the first step for me. With the new Toastmasters Pathways program, I will be learning nearly 300 competencies—practical skills that are transferrable to my professional and personal life.

I will continue on my leadership and communication journey and mentor others. One day I hope to take on the role of district director at Toastmasters. I also aspire to be a speaker at TED Talks.

Would you like to enhance your skills like Veena has? Feel free to drop by the next Toastmasters meeting and see the group in action. They meet every Tuesday from 12:05 p.m. - 1:00 p.m. at the Community Room in the Auburn Justice Center. If you are looking for a group closer to work or home, visit the Toast Masters website for something that fits your schedule.