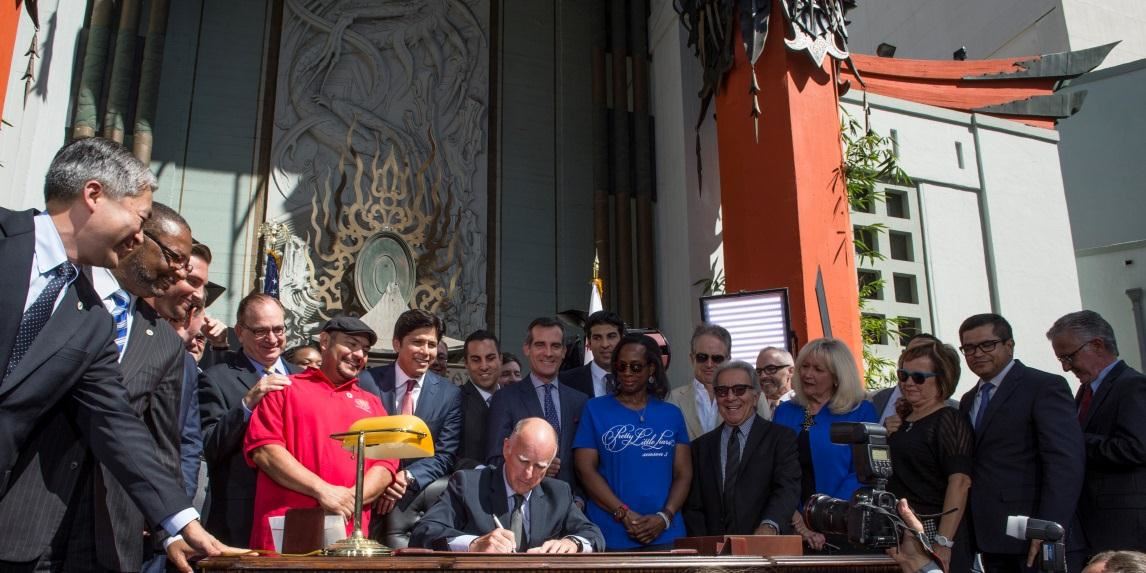 Governor Jerry Brown signs AB1839 to the delight of industry stakeholders and supporters.

The shores of Lake Tahoe and other Placer County scenes may soon appear once more on the silver screen. California Governor Jerry Brown, with strong bipartisan legislative support, including that of Senator Ted Gaines and Assembly Member Beth Gaines, recently signed Assembly Bill 1839. This bill gives the Golden State a robust film and television incentive program, strong enough to compete with the many states aggressively luring away this major California industry.

In the last 15 years, more than 40 states have created incentives to attract production to their areas. The reason: films and TV shows spend millions of dollars in local economies when they shoot on location. Of the 54 largest budgeted films ($100-$300 million) made in the last two years, only ONE shot entirely in California, a conservative loss of $5.3 billion NOT spent hiring our residents and businesses, and generating millions in tax revenue that underwrites important state programs such as education and health care.

California already has a modest but successful tax incentive program which retains only the smallest budgeted productions. And, while the current program more than pays for itself, returning $1.11 (per Southern California Association of Governments, March 2014) in state and local taxes, it barely makes a dent in the “runaway production” numbers. This year only five % of those who applied to the program were selected before the allocations were exhausted.

AB 1839 addresses these limitations. The bill also provides an additional five % tax credit for productions that shoot outside the L.A area. Under the current program, Placer County has benefited from four small productions, including Disney’s “The Muppets” and “Her,” the 2014 Oscar winner for Best Original Screenplay starring Joaquin Phoenix. Now, with triple the allocations starting in fiscal year 2015-16 and the additional tax credit for productions shooting further afield, Placer County-and the rest of the state-is again “ready for its close-up!”