Placer County is positioning itself to become a hotbed of filming activity, and it’s getting assistance in that realm from Los Angeles-based commercial director Tim Damon.

Over the past decade, Damon has brought at least 10 commercial and print advertisement jobs to the county, generating $230,000 in local economic impact. That figure includes his crews booking a total of 490 hotel room nights. Placer County Supervisors honored Damon on November 29 with a commendation thanking him for his contributions.

In late November, Damon filmed a commercial in Roseville as part of four days he spent in Placer County before his crew left to shoot in Sacramento and Oakland for their client Goodyear.

Damon’s work has showcased the county in commercials and advertisements seen all over the world, featuring clients such as Chevy, BMW and Toyota. Damon said he likes to shoot in Placer County because of the people.“Everyone here is so friendly,” Damon said. “It’s easy and everyone has enthusiasm and is very accommodating, and that’s the key. I know it sounds like a cliché, but I’ve worked all around the world, and my job is a thousand times easier if the people are nice that I’m dealing with. And I come up here every chance I get.”

Lewis works in the Placer-Lake Tahoe Film Office, which provides support services to film, television and print photography productions working on location in the county.“We are here to be a liaison between the community and production to ensure the process runs efficiently for all,” Lewis said. “Our office is part of the county’s Economic Development Office. What a production doesn’t bring with them they have to get from the local economy.” The film office helps by issuing county permits, providing key contacts and expediting what needs to be done for productions. They turn permits around in 24 to 48 hours. Before Damon’s latest shoot, Lewis went out with the commercial’s location manager to scout sites. The office also assists with lodging.

Lewis acts as the current chair of the 42-member Film Liaisons in California Statewide, a professional organization supporting efforts to make local communities “film-ready” and “film-friendly.” California has established a tax incentive for film and TV shows to attract productions. The incentive doesn’t apply to commercials. “It’s a modest program compared to others but at least it’s something,” Lewis said.
Lewis said Roseville is developing a film-friendly reputation. In addition to Damon’s latest commercial, the city has worked with Sacramento-based production company Big Table Media, which regularly films shows here for the DIY Network. Each time this company does a show in Roseville, $10,000 is generated in the local economy, Lewis said.

City spokeswoman Megan MacPherson said Roseville benefits from the advocacy of the county film office.
“When (Lewis) has production groups, we want them to know we’re open for business,” MacPherson said.
This means the city will assist in running requests through various departments - Public Works, Fire, Building and more - for timely approval. Sometimes a director will need to close down a street, set off explosives, divert traffic and because Roseville is a full-service city, “It’s one-stop shopping,” MacPherson said. She added that the city always considers whether a request will negatively impact residents before granting permission.
Production companies are drawn to Roseville because of its historic charm and options for variety such as a modern mall, railroad and subdivisions, according to MacPherson.

Anne Stokes contributed to this report. 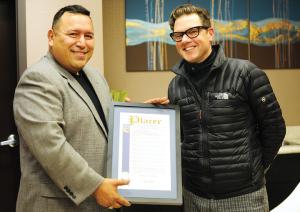 Placer County Supervisor Jack Duran, left, presents commercial director Tim Damon with a commendation honoring the Los Angeles-based director for the significant economic impact the Damon Productions company has had on the local economy. Over the past decade, Damon has filmed several national and international commercials in Placer County