The Placer County Board of Supervisors on Tuesday heard a presentation regarding the completion of the Auburn Ravine Gaging Station Fish Passage Improvement Project. 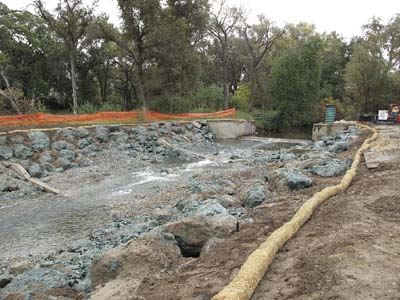 The project, west of Highway 65 in Lincoln on Auburn Ravine, constructed a fish ladder below the Nevada Irrigation District’s (NID) gaging station in the Lincoln Crossing Nature Preserve. The gaging station measures water flow through the stream. This is necessary to ensure that discharges from the Lincoln wastewater treatment plant meet dilution requirements.

Keane Summers, an engineer for NID, explained to the supervisors that the project was constructed by NID in cooperation with Placer County. The gaging station was originally built in 1981and over the next two-plus decades, water spilling over the weir cut into the soil eventually leaving a 6-foot cut into the streambed below. This created an impassible barrier for fish passage.

A 2004 survey showed that Auburn Ravine, above the gaging station, contains more spawning habitat in western Placer County that all other surveyed stream reaches. The waterway is used by fall-run and late fall-run Chinook salmon and steelhead trout for spawning.

The project included a more natural stream bed that consisted of rock chutes and armored step pools that were constructed to mimic a natural stream channel. The 183-foot channel was designed to prevent the erosion that created the impassible barrier. The design allows for fish passage in a variety of flows.

Keane noted that the project presented numerous challenges, including: permitting for a waterway; scheduling construction at times of low water flow; getting large, heavy construction equipment into a relatively small construction site; dewatering the area; and removing a significant amount of debris that had accumulated in the channel. He said the first thing that was done, prior to construction, was the capturing of all fish in the waterway. Once that was accomplished, a temporary dam was installed to divert the water out of the construction area. During grading, a high water table caused difficulties and 11 dewatering wells were drilled to remove a sufficient amount of water to allow construction to occur. These wells necessitated the temporary installation of electrical generators to power the wells and pumps and a 21,000-gallon settling tank to capture particulate matter that was in the water that was removed.

The finished structure includes chutes and pools, large, stabilizing walls and large and small rocks to ensure erosion does not occur. Once the structures were installed, the entire area has to be cleaned of mud and silt that was trapped during construction. The water used to wash off the mud had to be captured and treated before being reintroduced into Auburn Ravine.

Board Chairwoman Jennifer Montgomery commented on the importance of restoring waterways to improve fish spawning habitat. She noted that a large project in her Fifth District restored a meadow and stream channel to its original contours at Lake Tahoe. Completed last year, the Lake Forest project had a small run of Kokanee salmon in the creek for the first time in four decades.