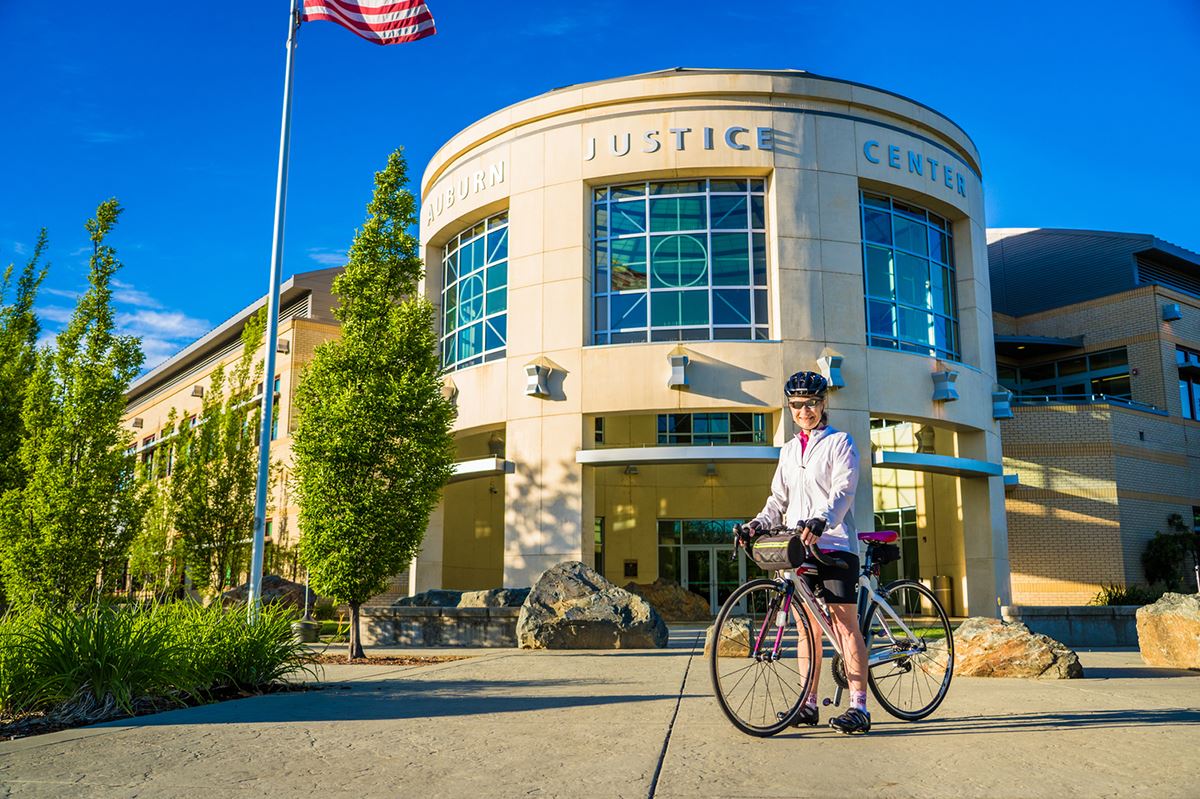 Sandy Pizzio works in the accounting unit in the Probation Office and is an avid cyclist, riding to and from work whenever she can. With National Bike Month in full swing, Placer County’s Bike to Work Day just around the corner on May 17, we catch up with Sandy on her commute from Applegate to work in Auburn to ask her a few questions about her cycling adventures.

How did you get into cycling, and tell us about your commute from Applegate to work?

I have ridden bikes all my life, starting with a tricycle. I am not a morning person, and when I commute to work, the first mile or two, everything is stiff or sore and I wonder why I decided to do this! Then, I start to look around and see and smell things and realize it’s a beautiful day, and I am so lucky to be able to ride a bike. By the time I get to work, I want to keep going. Contrary to popular belief, it is not all downhill from Applegate to Auburn, but it is definitely easier than the ride home. From Auburn to Applegate, there is a 1,000-foot gain in elevation. I don’t like to ride in the dark or the rain, so that does limit my bike commutes. I usually start in late April and can commute until the end of September or even early October. I set a goal for myself of commuting at least one day a week, but depending on conditions, sometimes it is more or less than the one day.

So how often do you ride during your time away from work?

I always try to get in at least one long ride on the weekends, and sometimes I’ll go for a short ride after work if I drove that day. This year, I was able to ride almost every weekend throughout the winter, so it was easy to stay in shape. Some winters aren’t as warm, though, so it would be a slower start in the spring. The last few years, I’ve used my vacation to go on a bike tour. This summer, I’m going to do a bike and kayak tour of the San Juan Islands in Washington.

Sounds like a great adventure! What other places have you ridden through?

Last summer, I upgraded to a better folding bike. The great thing about folding bikes is that because they fold, they are easy to take on public transportation. As soon as I got the new bike, I was itching to take it on a trip, but I only had about five weeks to plan it. I knew there is great riding in Oregon, and their Department of Transportation has designated scenic bikeways. Most of them are on regular roads, but they are lightly traveled on and have wide shoulders. I decided to do the Willamette Valley bikeway. I folded up my bike and put it in a cardboard box, called that my suitcase, and flew into Portland. I unpacked the bike from that box, assembled it in the terminal, then rode out of the terminal on it. I thought that was hilarious, but since it was Portland, a very bike-friendly city, no one else thought it was odd at all! I spent a day in Portland, then rode to Eugene, averaging 40 miles a day, spending each night in a different AirBnB home. I met wonderful people, and the Oregon drivers are much kinder to bicyclists than California drivers are. After Eugene, I took an Amtrak train back to Sacramento.

What’s your favorite place you’ve seen from a bike?

In 2012, my son gave me a cycling trip to Italy. I had never been to Europe, and to be able to visit Italy and ride through the smaller towns to see it up close was amazing. Since then, I’ve gone back and ridden in Portugal, too.

Back in the States, I’ve ridden the Erie Canal from one end to the other, and I’ve participated in Pedal Across Wisconsin. I’ve also done an day ride all the way around Lake Tahoe, which has been called ‘America’s most beautiful ride.’

I think the hardest trail I’ve ridden was the very end of Mount Diablo. From the parking area at the summit to the actual summit, there is a short stretch that must be a 15-20 percent grade. I was going so slowly that I was worried I would actually tip over! However, the ride back down the mountain was glorious!

Besides exercise, what do you get from cycling that you wouldn’t get from driving a car?

Getting on a bike makes me feel like a little kid again, with a sense of freedom and possibility. Although I have to stay vigilant when riding on the roads with cars, it is also a time to clear my mind. Of course, it’s great exercise, but I tend to overestimate how many calories I’m burning while riding. On long rides, I find myself daydreaming about what I am going to eat when the ride is finished. At the end of a week-long tour, I’ve usually gained a few pounds!

People think bicycling is hard, but anyone can do it. Start out easy, on a flat area, and then gradually add some distance. Hills are hard, but the more you ride up them, the easier it gets. If you are nervous to ride on streets with cars, go online and look for bike paths. The American River Bikeway from Folsom to Sacramento is a good place to start. There are so many resources, especially during Bike Month to help you get started.