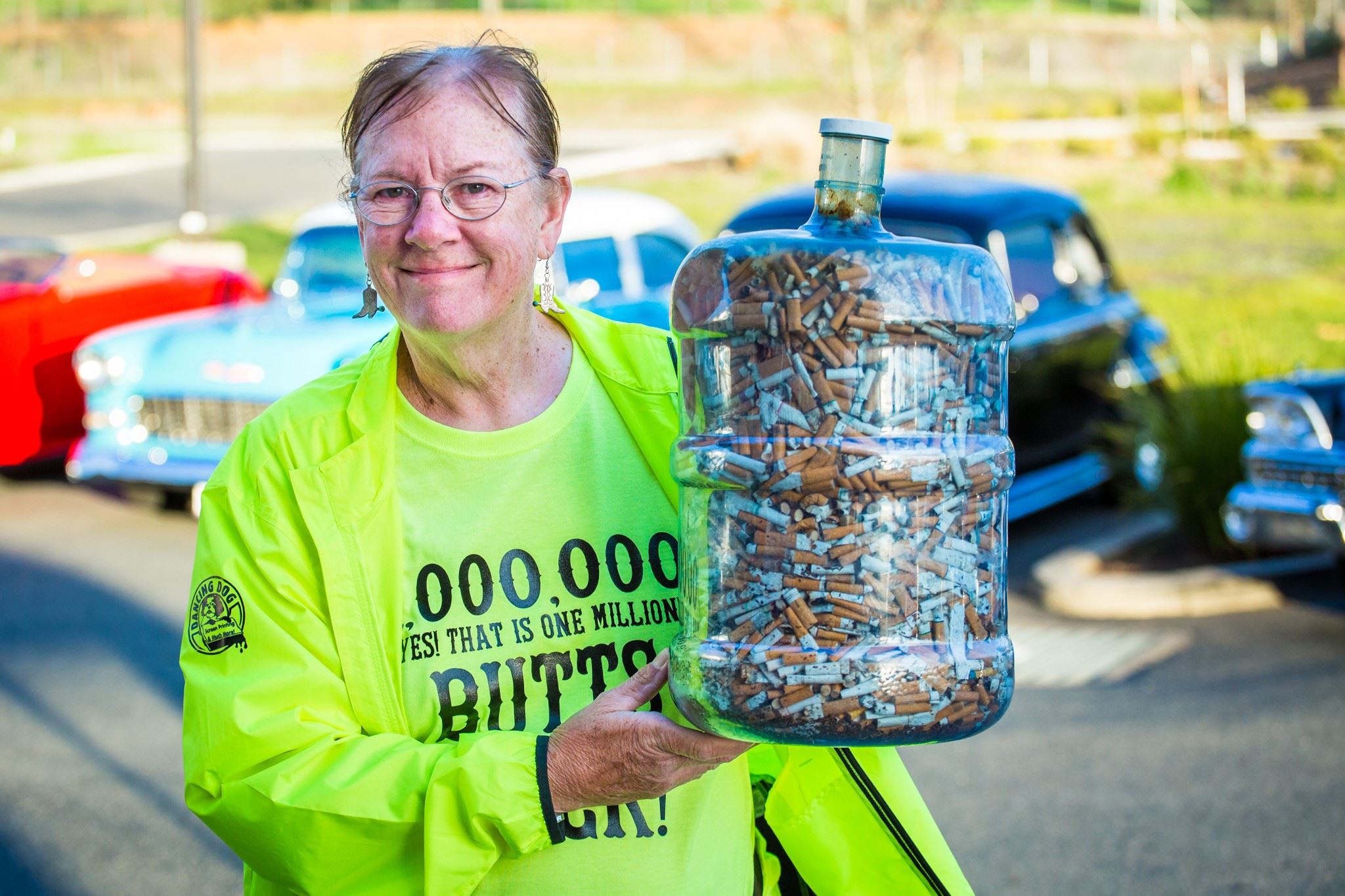 Sally Dawley took one puff of a cigarette years ago as a student - and that was all it took for her to form her lifelong opinion against cigarette smoking.

“I just knew [smoking cigarettes] wasn’t for me. It smelled so bad and I felt awful afterwards, I didn’t see how people could enjoy it so much. Everyone smoked back then,” said Dawley.

Dawley has made it her mission to help clean up the streets of greater Auburn by sweeping up as many discarded cigarette butts as she can. She uses the simplest of equipment - a broom and dustpan - to pick up the butts nearly every day. She hopes to inspire others to pick up not only butts, but any trash that doesn’t make into receptacles, she said.

“I go for walks all the time, and I just sweep them up and think to myself, well that’s one less butt that an animal won’t get,” Dawley said.

“Sally is truly an unsung heroine, taking positive action to address a real problem that affects all of us,” said District 5 Supervisor Jennifer Montgomery. “She’s a powerful example of what it means to be an active participant in making our communities better.”

Montgomery will present Dawley with a commendation at the Board of Supervisors’ meeting Feb. 20 in Auburn.

“When I lived in downtown Auburn, I couldn’t go one day on my walk without seeing all these nasty cigarette butts everywhere. I lost count of how many bird nests I saw with a cigarette butt shoved in there,” said Dawley.

Dawley has always enjoyed the outdoors, walking regularly and spending as much time as she can outside. She has become a well-known figure locally, giving herself the moniker, “the Butt Lady.” A local printing shop has donated neon-colored shirts and windbreakers to her, with her credo, “Keep Auburn beautiful” printed in bold, so she is easily recognizable patrolling the streets.

Her motive for picking up the butts stems from her deep love of the outdoors. She isn’t paid to do it, and she spends time nearly every day collecting the butts.

“I used to pick up about 3,000 a day, but it changes as the years go by. I use an old school bus clicker to count them, and I put [the butts] in these five-gallon water jugs and load them into my truck to take to the dump,” said Dawley. “I just can’t stand that people throw them on the ground, when there are trash cans everywhere.”

Dawley’s efforts have not gone unnoticed. Placer County Tobacco Prevention Program Coordinator Alexandra Wride was on hand to congratulate Dawley on her one millionth butt, and thanked her for her anti-smoking sentiments. Wride acknowledged that tobacco use is not just a public health issue, but an environmental one as well.

According to Placer County statistics, in 2016, 9.8 of adults in Placer County were smokers. Placer County Health and Human Services developed a tobacco prevention program with a mission to counter pro-tobacco influences, to educate Placer County residents regarding tobacco issues and to support the enforcement of tobacco laws and policies.

“I hope I can show people that smoking isn’t just bad for you, it’s bad for the environment and animals, too. It takes forever for those butts to decompose,” said Dawley. “I want to tell people to get outside, look around at the litter and stop throwing trash on the ground. I see people taking bags with them on the hiking trails to pick up the trash, so I know it’s working.”