Nathan and Joni, married for 17 years, came to the Placer Empowering People event looking for help with housing and dental care.

But most important to the couple was making sure their pets, a Staffordshire terrier named MacDaddy and an English bulldog named Mumsy, were taken care of.

“They were our number one priority,” Joni said of the animals, one of which they’ve owned for more than a decade and the other who they rescued and trained last year.

The dogs, both service animals trained to help their masters with everything from walking to seizure detection, got their vaccinations and also received beds and sweaters, which they wore back to their temporary home at the North Auburn shelter.

In its second year, Placer Empowering People brought essential services to more than 120 individuals in need, most of them homeless. Attendees lined up at the Auburn Renewal Center for medical, dental and vision screenings; help applying for benefits; clothing and food; counseling; employment assistance; legal help; veterinary services and much more. More than 40 organizations, ranging from nonprofits like Lighthouse Counseling to county and state services such as the Department of Motor Vehicles, were in attendance.

In one room, Sharon Gutierrez and three other stylists trimmed beards and styled hair.

“Empowering people is what I love about doing hair,” said the owner of Sharon Lucille Hair in Sacramento, who was volunteering at the event for the first time. “I just finished a bob for one woman and she loved it. I try to give back as much as I can.”

David Morgan, a doctor who is now semi-retired, echoed that sentiment.

“We’re just trying to help them physically, mentally, emotionally, anything we can. It’s very fulfilling,” he said.

He’d helped one client with a foot infection, and another with arthritis — and even sent one man displaying heart attack symptoms to the emergency room.

“People are very thankful and happy to get some care,” Morgan said.

Nathan, an Army veteran, has a housing voucher but has been unable to find a landlord willing to rent to him and his wife. Nonetheless, the couple has remained upbeat and expressed their gratefulness for the event.

“God has plans for us,” echoed Joni. 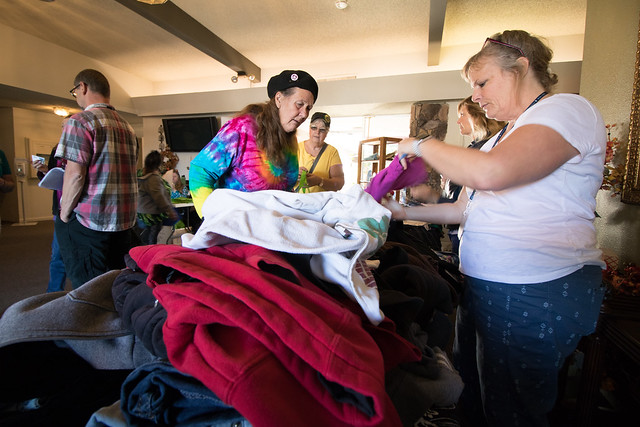