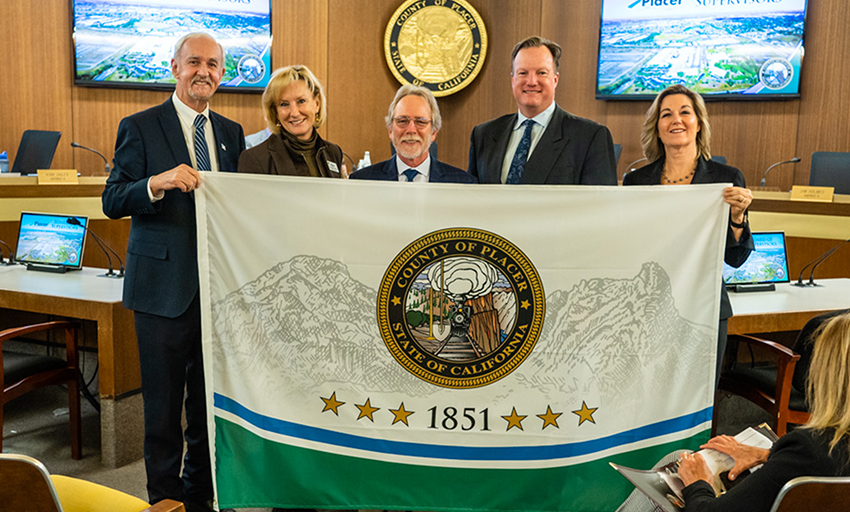 A newly redesigned county flag was officially unveiled during yesterday’s meeting of the Placer County Board of Supervisors. The redesign incorporates the popular branding and design elements of Placer County’s logo and color palette, which were adopted in 2015 and have become strongly associated with the region.

The county seal and year of incorporation are most prominent on the flag along with six stars, one for each incorporated municipality in the county. Swaths of Placer blue and green also add bold color to the flag representing the region’s abundant water and forested lands, which are home to numerous small towns throughout the unincorporated areas.

“Our previous flag, which was bright yellow and blue, was adopted in 1996 and its design drew heavily from our gold mining heritage,” said Board Chair Bonnie Gore. “We are pleased to bring forward a redesign using the blue and green which includes symbolism that represents all aspects of our beautiful Placer County. I am also proud of the inclusion of the six gold stars, which represent our cities and towns as we continue to build partnerships to work together in the best interest of our residents.”

Also featured is the famed Twin Peaks mountain, which runs along the Pacific Crest Trail on the edge of the Granite Chief Wilderness overlooking Lake Tahoe between Alpine Meadows and Homewood. These majestic mountain peaks are iconic in nature and are easily identifiable as Placer County mountains.

District 3 Supervisor Jim Holmes initiated the redesign effort in early 2019, 25 years after the first flag was adopted. “Our vision was to develop a flag that represented the distinct nature of Placer County from its suburban centers to its forested lands, abundant lakes and rivers, and majestic mountain ranges,” said Holmes. “I believe we scored a home run on the design as it captures much of what we were hoping to convey.”

The county flag flies under the American flag and the California flag at three county facilities: the historic Auburn Courthouse, the Finance Administration Building and the Placer County Administrative Center.