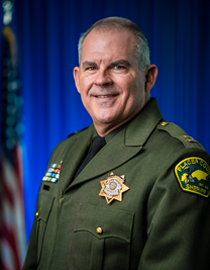 Captain Brian Silva started his law enforcement career in 1998 as a Correctional Officer with the Placer County Sheriff’s Office. The Placer County Sheriff’s Office selected Silva as a Deputy Trainee in 2000 and sponsored his attendance at the police academy. After his successful completion of the academy, he worked in various positions and special assignments, including Field Training Officer, Special Enforcement Team member, Honor Guard member, and use of force instructor, teaching defensive tactics, impact weapons, firearms, and Taser use tactics. In 2006, Brian was promoted to Sergeant and served in Corrections, on Patrol, and in Investigations as the Crimes Against Persons supervisor. Brian is a 2011 graduate of the Sherman Block Supervisory Leadership Institute.

In 2016 Silva was promoted to Lieutenant and served in various assignments, including Patrol Watch Commander, Patrol Administrative Lieutenant, and the Loomis Sub-Station Commander.

Brian Silva was promoted to Sheriff’s Captain in 2022, where he currently serves as Field Operations Commander.

Originally from Woodland, California, Silva grew up in Long Beach, where he attended Millikan High School. Brian returned to Northern California to attend Sacramento State University to play football. He graduated with a Bachelor of Science in Criminal Justice. Brian is the father of 3 and is very proud of his family’s long farming history in the Sacramento Valley.