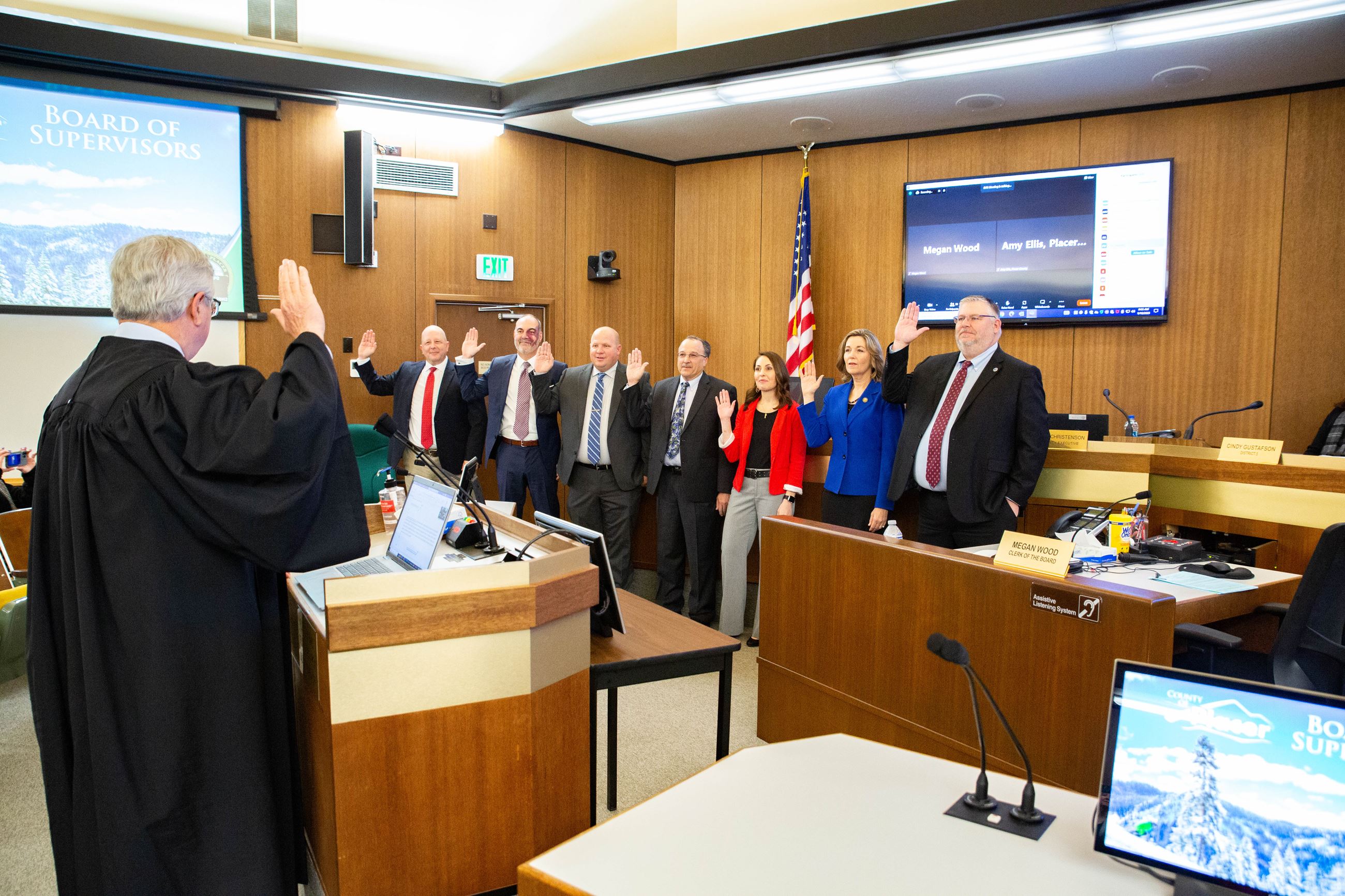 AUBURN, Calif. -- Seven elected officials took the ceremonial oath of office at today’s first meeting of the new year for the Placer County Board of Supervisors. Among those to take the oath was newly elected District 2 Supervisor Shanti Landon, who was selected by voters in November to fill the seat left vacant by Robert Weygandt who retired at the end of 2022 after 28 years of service.

“I am looking forward to serving the residents of Placer County over the next four years,” said  Landon. “This is truly a team effort and while we may not always agree, I know my fellow board members are dedicated to Team Placer and to continuing the effort to make this county an even better place for our kids and grandkids.”

Today's ceremonial swearing-in was preceded by the administration of an official oath of office for each elected representative that was conducted prior to the end of 2022.

Additionally, the Board of Supervisors voted to select District 3 Supervisor Jim Holmes as the next board chair for 2023, with Suzanne Jones as the next vice chair. These two positions have traditionally rotated to give every sitting supervisor an opportunity to serve in at least one of the positions during their term in office.

The chair directs the efficient and transparent operation of the board during meetings and performs a lead role in setting the tone of all interactions among the board, with staff, and with the community. The chair also ensures every supervisor and member of the public has the opportunity to participate in the deliberation of each agenda item.

As the outgoing board chair, District 5 Supervisor Cindy Gustafson was presented with a plaque by Holmes, who thanked Gustafson for her leadership throughout 2022. Holmes also shared a short presentation to pay homage to the first four women to serve on the Board of Supervisors since the county was established in 1851.

"Placer County entered a new era in government leadership today when Supervisor Shanti Landon joined the Board of Supervisors as the fourth woman to sit on the dais with Supervisor Bonnie Gore, Supervisor Cindy Gustafson, and Supervisor Suzanne Jones," said Holmes. "As the new chair of the board, I’m honored to serve with these four women of high caliber."

"I also wish to pay homage to four women trailblazers who each served previously with four men during the past several years," added Holmes. " They are retired supervisors Terry Cook, Harriet White, Susan Hogg and Jennifer Montgomery. Their leadership set a tremendous example for the women in Placer County government"

The Placer County Board of Supervisors meets regularly at 9 a.m. typically on the second and fourth Tuesdays of each month at 175 Fulweiler Avenue in Auburn. The meetings are open to the public but residents can participate remotely via Zoom.